San Francisco is the 3rd most popular city in America and the most famous one around the globe. There are much more than just being a hot tourist destination, SF is a major hub for high-tech startups and large companies. The investment capital of the San Francisco area produces more tech millionaires than any other region in the United States. Today we are going to share a list of highest well-known venture investors that strive to invest in upcoming startups.

This article is part of a series where we present you the best Venture Capital firms across different cities and countries. Here you can view the rankings for Dallas, Austin and Atlanta.

500 Startups is a global venture capital firm with a network of startup programs headquartered in Silicon Valley with over $454M in committed capital across 4 main funds and 15 thematic funds. They have invested in 2,200+ technology startups globally since its inception in 2010 including Twilio (NYSE: TWLO), Credit Karma, SendGrid, Grab, GitLab, Bukalapak, Canva, Udemy, TalkDesk, Intercom, Ipsy, MakerBot (acquired by SSYS), Wildfire (acquired by GOOG), and Viki (acquired by Rakuten).

500 Startups support startups via their Seed Accelerator Programs which emphasize digital marketing, customer acquisition, lean startup practices, and fundraising for pre-Seed companies. It contributes to the development of innovation ecosystems by supporting startups and investors through educational programs, events, conferences, and partnerships with corporations and governments around the world.

The team of 150 people based in 20 countries manage venture investments across 74 countries and speak over 25 languages. In addition to investments, they are passionate about helping build viable startup ecosystems around the world and run educational programs, events and conferences, and partnerships globally. Their investment team and mentor network has operational experience at companies such as PayPal, Google, Facebook, Instagram, YouTube, Yahoo, LinkedIn, Twitter, and Apple.

Since 1996, Index has partnered with exceptional entrepreneurs who are using technology to reshape the world around us. The companies they’ve started include Adyen, Deliveroo, Dropbox, Farfetch, King,Slack, and Supercell.

First Round is a seed-stage venture firm focused on building a vibrant community of technology entrepreneurs and companies, including Uber, Square, and Warby Parker. Through custom-built software, incredible in-person experiences, and a host of other unique services, First Round helps tiny companies get big while constantly reimagining the role ofventure capital. It offers a growing number of services and products to help founders build companies from scratch.

First Round has adopted the Diversity Term Sheet Rider.

First Round Capital's most notable exits include Uber, Ring, and Planet.

Founders Fund is a venture capital firm that invests at every stage in companies building revolutionary technologies. It has been investors, founders, and early employees of prominent technology companies. It has historically invested in a wide variety of sectors, including aerospace, artificial intelligence, advanced computing, energy, health, andconsumer Internet.

Founders Fund's most notable exits include Meta, Lyft, and Spotify.

Benchmark invests in and works alongside entrepreneurs building startups into transformational companies. They focus on early-stage venture investing in mobile, marketplaces, social, and infrastructure and enterprise software. Founded in 1995, the firm has offices in Woodside and San Francisco, California.

The firm has been recognized for itscommitment to open source and is noted for creating the first equal ownership and compensation structure for its partners. The six equal general partners who take board seats and a hands-on approach to every entrepreneur and company they back, with no junior investment staff. Current general partners are Matt Cohler, Peter Fenton, Bill Gurley, Mitch Lasky, Eric Vishria, and Scott Belsky. Benchmark has had 37 exits since beginning of 2011; 14 IPOs and 23 M&As representing a total market value of more than $60 billion.

Benchmark's most notable exits include One Medical, Grubhub, and Zendesk.

Matrix Partners's most notable exits include Apple, Zendesk, and HubSpot.

Spark Capital is a venture capital firm that invests in the consumer, commerce, FinTech, software, frontier, and media sectors. It was founded in 2005 and is based in San Francisco, California.

Spark Capital's most notable exits include Coinbase, Twitter, and Wayfair.

Bain Capital Ventures invests in seed to growth-stage startups that are using tech to disrupt existing markets or create entirely new ones. The firm invests from seed to growth in enterprise software, infrastructure software, and industries being transformed by data.

Bain Capital Ventures was founded in 1984.

Initialized Capital is an early-stage venture capital firm focused on the seed. Initialized has 6 investing partners and over $3.2B under management over five core funds since its founding in 2012. The firm's startups have created in aggregate over $200B in market value so far.

Initialized Capital's most notable exits include Coinbase, Reddit, and Wave. 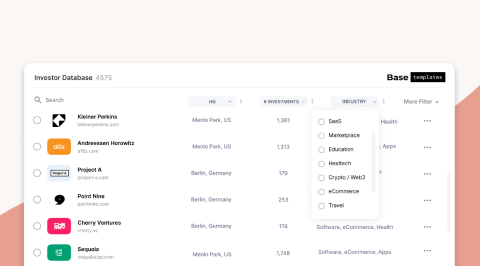